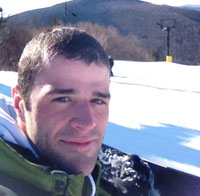 I spend my days using tools from data science to wrangle big biological datasets. Most of my research involves modeling how yeast and cancer metabolism is shaped by genetics and the environment. The rest of my time I spend watching MMA and training BJJ.
Recently, I have been fusing these passions by applying exploratory data analysis to MMA and BJJ at FightPrior.com.

My research focuses on understanding how genetic and environmental changes alter the complicated systems of metabolism and physiology. I try to model systems using data-driven approaches that break network-level behavior into simpler sub-questions.

I am currently a postdoc with John Storey where I am working on machine learning oriented approaches to systems genetics and sports analytics.

I recently completed my PhD in the program of Quantitative and Computational Biology (QCB) at Princeton University; my adviser was Josh Rabinowitz.

My research primarily focused on:

Published papers from this work are:

Undergraduate and post-baccalaureate research at Cornell

After graduating from Cornell, I worked as a research specialist in the laboratory of Andy Clark for four years. During that time I worked on a quantitative/population genetics project aimed to determine how heterogeneous metabolic phenotypes were inter-related and dependent on expression and genetic variation using D. melanogaster as a model.

While this project is still ongoing, several papers have been published:

During my undergraduate research with Teresa Gunn at Cornell I investigated the genetic basis of cardiac arrhythmias in dogs: